One Piece was my favourite manga, and was at a point near perfect, but after Wano, the story just has a blemish that won't go away. 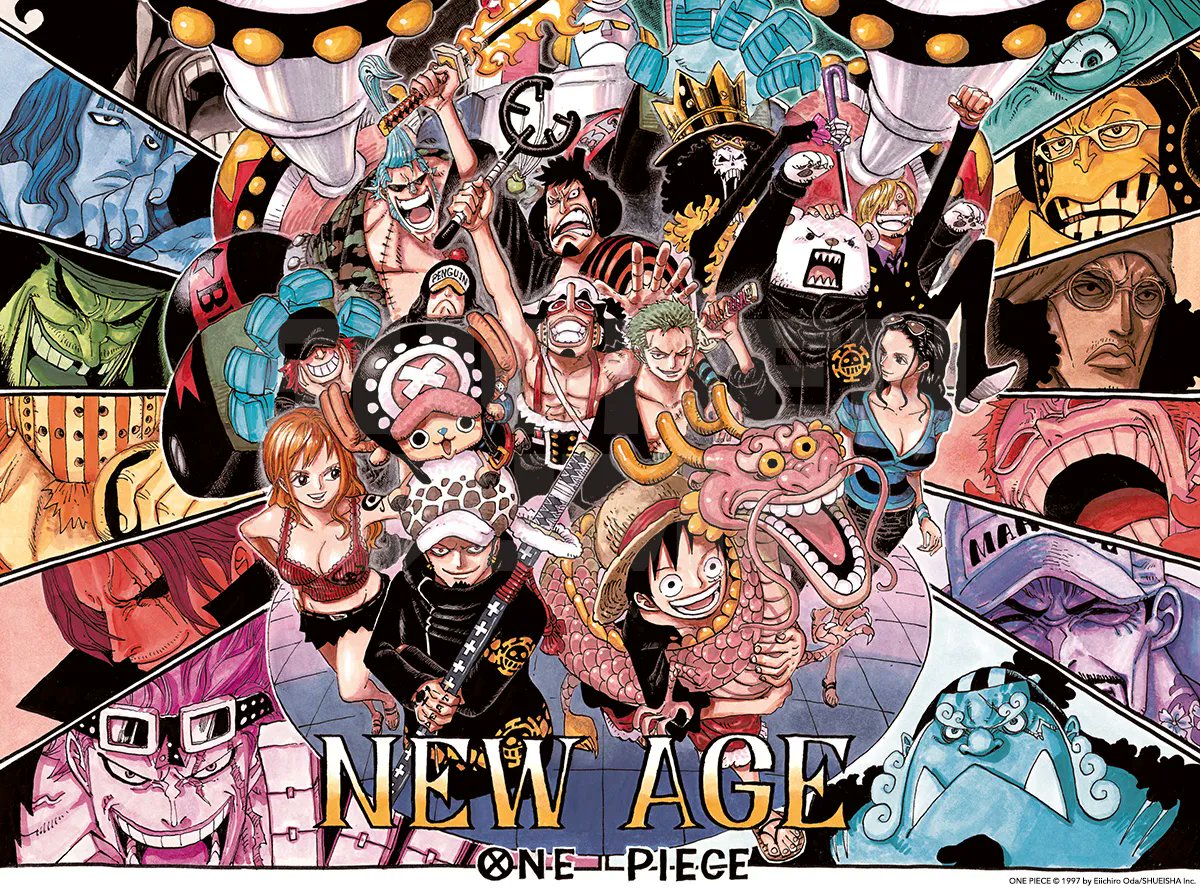 Wano is without doubt the worst arc ever, it reminds me of Game of Throne's ending, it's a disgusting arc. I could critique it all day and I'll still find more to criticise after. The way Big Mom and Kaido were taken out of the arc was so ridiculously anticlimactic is incredible. I wouldn't be surprised if they're still alive and think they are still alive.

The current arc, I still don't find it as exciting. I am generally not very optimistic for the future of One Piece, but as I've read it to this point, I might as well just go along until it ends.

Were Kaido and Big Mom Awakened?

Kaido and Big Mom were all awakened. To assume anything else is ridiculous. The problem, however, is inconsistency. I mean, we’ve all said it before, Wano is not a good arc and the more I marinate on it the worse it gets. It is still mindboggling to me why Oda didn’t decide to make Kaido and BM’s awakening a “thing”, when he did so with Luffy, Law and Kid. Kaido is a much more important character than Doflamingo, Katakuri and Lucci, his awakening should’ve been given more space. His awakening should’ve been a major turning point, think Freiza’s final form or Byakuya’s Bankai, yet it will forever be something to assume. That sucks.

It’s ridiculous that kaido and big mom weren’t awakened but there is nothing they have done at all that can be even remotely tied to an awakening. We are dealing with two separate types of awakening we should have seen, a mythical zoan awakening and a paramecia awakening.

On the Zoan end we have seen a few awakenings. First is the impel down folk who seem to have been consumed by their animal nature to a great degree. I think it’s fair to call them failed awakenings in a sense, as dangerous as they may be. Then we have 2 other confirmed zoan awakenings and maybe a third one.

The first two are of course Luffy and Lucci. Lucci and luffy show the cloud ribbon around them and apparently weren’t consumed by their inner nature or whatever. Luffy also exhibits traits of paramecia awakenings and straight up new abilities. As the possible third candidate for zoan awakening we have yamato who also has the ribbon thing around her which she shares with luffy and lucci.

It’s also worth noting that all of Luffy’s G4 techniques have the ribbon but it’s unclear how and if they are connected to awakening. Maybe there is such a thing as a partial awakening... Now, looking at every single Zoan awakening we know, there’s zero things in common between kaido and them. Most glaring of all kaido does not show the ribbon thingy.

Lucci also looks like he has fiery hair on his back when awakened which seems sort of present in Luffy’s G4. But in this arc Kaido only exhibits something like this when in his fire mode dragon form. But at the same time he doesn’t show the ribbon at this stage either. It’s also worth noting that the abilities we saw Kaido and Momonosuke share were pretty similar.

Even Momo’s flame in dragon form was potent enough to give an admiral pause. Yamato in turn shows the ribbon thingy even in her animal form. The lack of differences between momo’s and Kaido’s animal forms perhaps evidences kaido’s lack of an awakening at least in regard to normal animal forms.

On the paramecia front I think things are both more straightforward but also less in some regard. We have seen paramecia awakenings from Katakuri and Doflamingo. We also have Law and Kid whose awakenings seem a bit different than simply extending the range of their abilities.

Law’s awakening rather than extending his ability beyond his body seemingly allows him to imbue the properties of his room into objects. However to begin with it worked beyond his body. Kidd’s awakening gives him the ability assign polarity to things.

Which is weird but kind of tracks with extending his ability beyond his body. Big mom’s ability to begin with only works outside her body. Paramecia fruits do not seem to have any visual cues like Zoan awakenings. It’s not impossible some of big mom’s techniques are the result of an awakening but there’s no obvious one that can be definitively said to be one.

If I had to guess I would say that out of big mom’s techniques the one most likely to be the result of an awakening one of her latest ones. The one she used to heal herself and power up against law and kidd. Because it allowed her to use souls on herself, a living thing.

Just want to add some more considerations here, though I don’t think this really changes the fact that it’s hard if not impossible to pinpoint the awakenings of the Emperors.

We do know that KRoom influences the body in other ways, since that’s what Law said. The biggest thing seems to be attacking bodies from the inside, not from the outside. His power was always overpowered though, so he throws things off though.

I mean, Room pre-timeskip seemed pretty physical, but then he manages to go and separate the PERSONALITIES of people? How does that even work? We went from physical to flat out, I’m switching the metaphysical concept of the mind into other bodies. His power makes figuring out the Awakening before Wano very hard.

With Big Mom, everything you said is true, but we know her ability works on herself, since she split her soul in three. So for her we have both the inside effects and outside effects already. Big Mom is alot like Law in that her power does too many things.

Without Big Mom herself identifying what was an awakening and what wasn’t, we simply cannot pinpoint if it has already occurred. Again, Law being able to affect personality and treat it as if it is something physical is what makes it very hard to pinpoint the “natural limits” of these versatile fruits.

The Paramecia production fruits are by far the simplest to predict. Kidd’s is simple too since he turns other people into magnet humans.

On the Zoan side, one thing I think is worth considering is that right now, Luffy is the only person whose fully mythic properties are hidden behind an Awakening. That’s weird. Every other mythic Zoan is out there using their forms, but not Luffy. It’s honestly strange that the one who ends up mimicking Luffy’s aesthetics is Lucci.

Nothing we saw of Kaido’s powers is remotely similar to how successful Zoan awakenings seem to behave if we go by Luffy or Lucci. The clouds generated by Kaido are irrelevant to awakening, they have a specific name and seem to be a natural ability dragons have.

Yamato in turn does appear to be an awakened Zoan user considering she has the same clouds as Lucci and Luffy when awakened. Not sure of how Kaido’s would manifest in a way similar to paramecia. Mythical Zoans can be reasonably described as Zoans with paramecia abilities IMO however when Kaido saw Luffy’s transformation he was very surprised by all the Luffy could pull.

He immediately spotted Zoan traits on the awakening but couldn’t make sense of the ability to extend powers beyond itself. You’d think that if Kaido was also an awakened mythical zoan user luffy’s abilities would have made more sense to him. Kaido’s abilities just in general do not translate all that well to extending beyond his body.

It actually makes me wonder if every fully mythic form is already awakened. Kaido’s fruit is the strangest one too because it’s a mythic fish. The Carp that becomes the Ryu is the one that scales the waterfall.

Right there, you have a sequence of transformation that you could imagine being incorporated into the mythic Zoan. That said, because Momo exists, we know the mythic fish is a dragon from the onset. What it ultimately shows is that Luffy can’t be the bench mark for other Mythics.

Another consideration point: Did Whitebeard have an awakening? Did Marco? Is it ridiculous that they didn’t? If the emperors really DONT have awakenings, then what we might be seeing here is that their generation may not have cared for awakenings, focusing on Haki development instead.

We KNOW Kaido values Haki more given what he said about it. If Oda wants to make it work, he COULD say that the newer generation having awakenings is a by-product of them wanting to catch up with the old guard.

Final Point which is worth considering with Awakenings and what makes them difficult to pinpoint:

I sometimes feel that members of the strawhats got certain versions of abilities ahead of Luffy.

Then we have Brook who understood his devil fruit to the point that he unlocked access to an entire energy type that allowed him novel interactions with the homies and elemental powers. Back when Doflamingo revealed Awakenings, I would have argued that Brook got it or was well on his way. Now, not so much, but his fruit illustrates why it’s so difficult.

Look at how much Brook has exploited his fruit, and it STILL might now be an awakening even though it offers so many new combat options and uses. Like with Big Mom and Law, Devil Fruit hyper mastery blurs the lines and makes pinpointing awakened qualities hard.